Padraig McCaul is a Dublin born artist who now lives and works on Achill Island, off the Mayo coast. His work is widely collected internationally and at home and is held in many prestigious collections, including the Hottinger Art Collection in London, the President’s office, Notre Dame University, USA, the Haddington Hotel, Dun Laoghaire and the Tannery Restaurant in Dungarvan.

He has held numerous sell out exhibitions in Ireland with the Doorway Gallery in Dublin and the Kidogo Arthouse in Fremantle, Australia and exhibits regularly at the Affordable Art Fair in London. His work has featured prominently in Eircode‘s national marketing campaign and website. He produces a range of limited edition prints and art cards that are stocked in House of Ireland in Dublin and select outlets along the Wild Atlantic Way, including Carraig Donn.

From Achill to Broadway, New York

In 2019 he completed a collection of 20 paintings that were used as the stage backdrops for the contemporary dance drama – Fáinne Óir – written by Mayo composer Kathy Fahy, with choreography by Ciara Sexton, former lead dancer with Riverdance and Lord of the Dance. The show premiered in the Theatre Royal, Castlebar on September 20th 2019 and travelled to New York on 26th September 2019 for it’s American premiere in Symphony Space, Broadway.

McCaul’s paintings are drawn from the untamed landscapes and coastline of Ireland’s Wild Atlantic Way which has had a profound influence on his work, providing inspiration through the natural beauty and colour of the surrounding landscape. Describing his symbiotic relationship with his adopted home place, Padraig says ‘’It has everything that a landscape artist would want, there is the sea, the mountains, the rolling bog, and the sky and the light that changes every hour of the day. There is no reason to go beyond it, there is so much here to inspire painting’’.

He presents the Irish landscape in a series of colour filled, evocotive images, where broad strokes are preferred to fine detail and where simple, uncluttered compositions allow room for the viewer to get lost in the paintings. Houses, roads, farm buildings, country lanes, all feature strongly in his work. His work has evolved to include more figurative work, primarily based on his own family members, using simple colour filled forms to suggest family. The figures have opened up new possibilities to explore colour and emotion, with a particular emphasis on the warmth of close relationships between family and friends.

Padraig shares his passion for painting with an equal passion for music and plays saxophone with the Mayo Concert Orchestra. He is represented  in Dublin by the Doorway Gallery, on South Frederick Street and by a select number of regional galleries along the west coast including the Whitethorn Gallery in Clifden and the Western Light Gallery in Keel, Achill. He runs an annual series of painting workshops on Achill Island between May and August.

When all Roads Lead Home – The Doorway Gallery, Dublin – 2016

Along the Atlantic Way – The Doorway Gallery, Dublin – 2015

The Light Of Which I Speak, The Bad Art Gallery, Dublin 2009 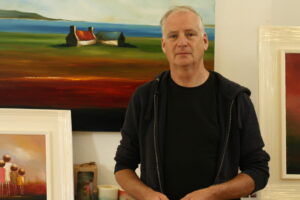