Laura was born and raised in Dublin, Ireland, as the eighth daughter of ten children. Her higher education began at Trinity College Dublin in a business degree programme, before her apparent gift drew her to the USA to study at the School of visual Arts in New York where on graduating she was awarded the Outstanding Achievement in Illustration Award.

On completing her education in New York, Laura returned to Ireland and began her career as a freelance illustrator. During this time she did a variety of work, including regular drawings and paintings for the two National Newspapers, weekly portraits for the Irish Times, and court drawings for the Independant. She then began to concentrate on fine art, and had her first solo sell out exhibition in 1999 at the James Gallery, Dalkey.

Laura works predominantly in oil. Her work is very much a portrayal of her own life experiences, and is inspired by her family, surroundings and the human figure. Her ability to to capture light, reflection, and shadow gives rise to the most captivating beach and street scenes.

Her portrait work has earned her awards and pride of place in some of the most eminent collections and family homes. Her most recent success, May 2020, was to win first place in the Sky Portrait Artist of the Week.

She has the innate ability to capture the most subtle of human expression, conveying the absolute essence of the individual.

Laura has enjoyed highly successful solo shows in Ireland and London, and she has taken private and corporate commissions throughout Ireland, Europe, and the USA.
Laura is married to Michael Grehan and has two daughters and a son. They live in South Dublin, close to the sea where much of her inspiration is drawn.

Watercolour Society of Ireland (Member since 1997) 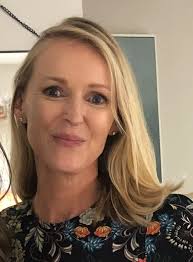