Primarily a landscape painter in the romantic tradition, Kenneth Webb’s subjects of bog-scapes, sea scapes, and wild flower meadows have been truly original contributions to Irish art over the past 50 years. He evokes a Gallic sense of mystery and mood in his impressionist waterlily and bog and landscape paintings of Connemara.

A fascination with nature has gripped Kenneth since childhood and his best work captures the sacredness of garden, flower, forest and bog. In recent years his original use of colour has influenced many of his contemporaries.
Kenneth has said “I would wish to paint a picture which has the ability to move me as does music; to turn the heart, not merely an impeccable example of craftsmanship.”   to this end he uses dramatic design and primary colour for emotional.

Born in London in 1927, Kenneth Webb served in the Royal Navy and Fleet Air Arm after demobilisation in 1948 Kenneth enrolled in the Glouchester College of Art from here he graduated with a National Diploma of Design followed by a stint at the University of Wales from where he graduated with distinction on 1953. In that same year Kenneth was appointed as Head of Painting at the Ulster College of Art and moved to Ireland the land of his paternal forebears, this move and the influences of the wild rugged landscape with all its magnificent colour and iridescent light has directly and indirectly influenced Kenneth’s destiny.

Kenneth Webb in his twenties and thirties exhibited widely in London, Paris, Washington D.C. Boston, Toronto, Jersey and of course Ireland. Being reclusive by nature and actively shunning the limelight, he has been happy for the past 50 years to confine his shows to Ireland where two major galleries have sold almost everything he has produced.
In 2010 W.H. Patterson of London (which subsequently became Gladwell and Patterson) had their first very successful major exhibition of Kenneth Webb’s work,  this was followed by successful  exhibitions in 2012 and 2015. To celebrate  Kenneth’s 90th birthday in May 2017 they hosted a large retrospective in London followed by a touring Exhibition of the USA. 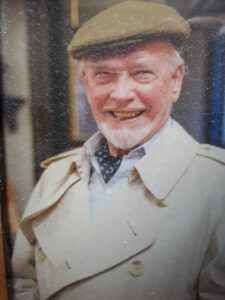