Born in Dublin in 1961, Anne emigrated to Canada with her family at the age of 15, where she lived for 15 years, studying art, and Psychology at McGill University, in Montreal. While the Canadian wilderness proved a great inspiration, it is the stark ‘Irishness’ of Connemara and it’s people that has always been at the heart of her work. She returned home in 1990 to live in Connemara.

In a career spanning 35 years she has participated in many group and solo exhibitions both in Canada and Ireland.

She has exhibited in the Sales Gallery of the Montreal Museum of Fine Arts, and in both The Royal Hibernian Academy’s Banquet and Annual Exhibitions, where in 1992 she won ‘The Award for Work of Exceptional Merit in Watercolour’.

In 2009, having raised her boys in Clifden, she realised a lifelong dream of opening The Whitethorn Gallery, and has devoted the last 11 years building it into the Mainstream Gallery that it is today.

1998 1 Year of Masters in Counselling Proram at Trinity College,  Dublin.

1994 Invited to Exhibit at the R.H.A. Banquet Exhibition, Dublin. 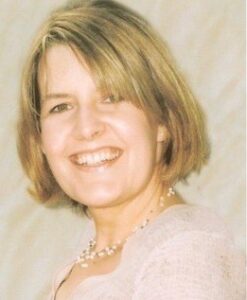